Pigeonnote :: Love Echo – I Promise You Always The Sky 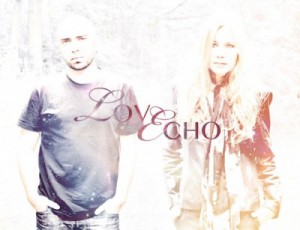 There seems to be a plethora of synth-pop duos out there at the moment and Tokyo/Luxembourg based Love Echo also attempt to make their mark on the genre with their upcoming debut album I Promise You Always the Sky out January 28th onLebensStrasse Records.

Love Echo came about when Vic Miranda (producer) and Vicki Glass (Vocals) felt music had lost its beauty and decided to make something that they love and hope will give people goosebumps.

Unlike some synth-pop duos they’ve shunned the moody approach and Glass’ vocals are as sickly sweet as pop princess Kylie Minogue’s. Yet in a dream-pop manner they are sensual, take openerDeparture, Glass almost seduces the listener as she declares ‘I need you’. With this alluring charm the duo recorded and released their own take on The Cure’s The Love Cats (track 3 on the album), which caught the attention of the world’s ears with over 40,000 listens on their soundcloud page alone. The Cure‘s famous lyrics, now in the hands of Glass, slide over resonate piano.

Whilst none of the tracks build into dance anthems, there is underlying dance vibe to I Promise You Always The Sky. The synths are thick in parts and the melodies sometimes urgent. There are moments when you think a track might just explode into an uptempo scurry. However, like in the latter half of Daybreak, the synths always bow to the soothing qualities of Glass’ vocals.

Falling into into a sleepy haze whilst listening to this album is easy, fourth track Eligyfloats on with only the flickers of a drum machine to keep you conscious, as Glass whispers, ‘it’s all a lucid dream’.

Love Echo have to contend in a highly saturated genre but there are some beautiful tracks on I Promise You Always The Sky. The Love Cats cover is just mesmerising and the poppy/dance feel to the album will play to Love Echo’s advantage in terms of commercial success.